The Blinders have shared their new track ‘Black Glass’, the latest and final track to be taken from their upcoming album Fantasies...
View Post 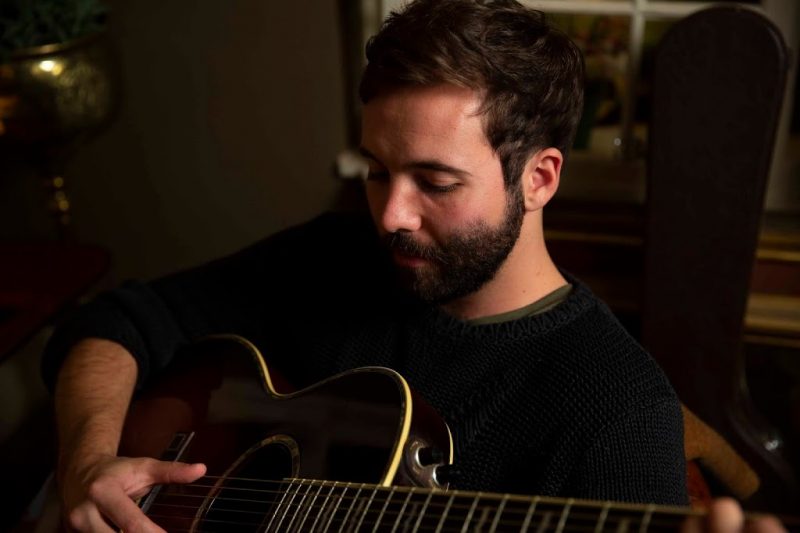 After working with Ed Tullett (Novo Amor, Hailaker) on his previous Silhouettes EP, garnering praise from Radio 1’s Huw Stephens and opening for Rhye at London’s KOKO, JJ returns with a delicate and emotional selection of tracks.

JJ’s new single ‘…if you’re awake in the night’ and the upcoming EP “The Theft and The Flight” has all the tenderness and artistry of Sufjan Stevens, Nick Mulvey and Bon Iver while also capturing its own voice and tone. Acoustic guitar-led with soft falsetto vocals, incorporating subtle, dappled sampling, electronics and piano, the new work is an exploration of JJ’s rich and intense, emotional soundscapes.

Following his first EP, JJ went back into the studio to arrange a new body of work. Having spent the early years of his career as a top-liner and collaborator, he thought it time to take a considerable catalogue of songs to his band and work with singular vision to create the sound he wanted.

Speaking on ‘…if you’re awake in the night’ and the new EP JJ said:

“Returning home in March last year to a police cordon around the car park of my flat, I turned on the news to discover that a young man had been brutally murdered on my doorstep. Not having a real insight into the growing culture of gang violence in London, I wrote ‘…if you’re awake in the night’ to chronicle the surreal experience of those who come inadvertently into contact with a troubling world they don’t understand.

I wanted all my new music to be honest and grounded, both lyrically and in the way it was recorded. I spent months experimenting at Natural Habitat Studios working with many great musicians to make something I hope feels homespun, authentic and vivid.”

Listen to JJ Draper’s new single “…if you’re awake in the night” here below and read on to get to know the mind behind the music.

Looking back, what were some of your earliest entries into music appreciation? And music production?

My earliest memories of loving music are in the family car, probably. I’ve got 3 older brothers and we had this enormous space wagon (Toyota Previa RIP) that took us all down to Wales for holidays. We listened to loads of Travelling Wilburys, Bob Marley and Jimi Hendrix.

When I first started to think about music making more deeply-focusing on HOW it was made – I was in my early teens. My brother had introduced me to Jeff Buckley, Rufus Wainwright, Elliott Smith, Nick Drake and it set the wheels in motion toward an obsessive listening period where I absorbed every influence I could.

Take us through your songwriting process. Are there any particular steps you take when putting music together?

It’s a very loose process but is consistently the way I write best so I suppose it’s a formula! I improvise on a guitar (and sometimes piano), often in deranged tunings, and find a progression or part that excites me. Then I’ll begin making melodies and improvised lyrics over that. At that point, the melody and mood start to determine how the progression develops from section to section. I’ll record all this in voice notes until a whole structure is complete and only after that do I sit down and write a structured lyric, often incorporating the nice parts of any improvised moments of attitude and creativity. I write prolifically ‘til I have a load of stuff to record then lose interest in it ‘til I’ve cleared the decks in the studio.

What gets your creative juices flowing?

Difficult to say. I have an internal motor that is always running and a restless energy. My friends and family will do impressions of me “flapping” which is a collective term for all the various pacing, arm waving, hand twitching stuff I get up to when I’m visualising. I sort of black out and have these intense periods of focus and creativity and move around a lot. It’s odd. Although I write honestly about things that happen to me or around me, I think the inspiration is more from the feel and sound of the arrangement I’m imagining. The desire to reach that “goosebump” feeling, that moving unique ambiguous feeling that great musicians have given me my whole life. The song can really be about anything but I’m looking to initiate that ecstatic release for myself and for others.

As a musician, it becomes apparent that there is a huge difference between the art and the business. Is there anything about the music scene that you would personally change?

Where to start? There’s a lot I’d change about myself, society, humanity, people! Nah, to be honest, I understand the things I find frustrating in the music industry – there’s a lot of fear and a lack of ambition. For instance, an example of what I deem to be bad business, is the pop industry’s obsession with trying to replicate the success of another artist by finding soundalikes. It’s astonishing to me that a lot of money (and there still is a lot of money out there, no matter what people hear) gets poured into artists who are the “next Adele” etc. It’s a sure fire way of getting a quick, decent return on an investment but shortsighted, lacking in ambition and real creativity. I hate the thought of great singers or songwriters being forced to mould themselves around something that has already been. The audience wants new things. Of course you have to trust in the development and packaging of a new thing, but that’s what the industry should be investing in. I don’t mean everyone needs to be a radical, but an honest perspective will always be “new” in some sense, have a unique sound and voice. That and the fact that labels etc are so risk averse that artists often have to be at the stage of self-sufficiency to attract them – like “hmmm, there’s a captive audience that we can jump in on and take a cut of” rather than giving talented people the infrastructure to succeed.

Studio work and music creation or performing and interacting with a live audience, which do you prefer?

Impossible question! I’ve been performing since I was 4, was an actor predominantly til I was 21 and the “golden glow” of being on stage, the charged silences and the roar of applause is heaven. I love making people laugh, too, there’s no better feeling. BUT, it does have a tendency to leave you hollow and on a downer, like any drug. The studio and writing, however, is a much more lasting pleasure. The songs continue to make me proud and excited to share, and there are definitely some real moments of ecstasy when you start to realise a sound and it’s just as good as you imagined. I can’t say. I think I prefer performing, JUST.

What is the most memorable response you have had to your music?

I love hearing people have had shivers or tears because that’s always how I’ve judged how much I love something. I have to say, though, at one of our last headline shows at The Grace – having an entire audience belting out the chorus of Gwythian so loud I stopped singing, and turning to my band who were all grinning, was incredibly special. It just felt such a positive thing to share with people.

What’s on your current playlist?

Big Thief UFOF, Wilco Ode to Joy, Todd Rundgren Can We Still Be Friends? I should say I tend to listen obsessively to a few things and not go through reams and reams.

Breakdown the news for us: what can we expect from you in the near future?

I’ve got an EP out on 3rd July which includes two new tracks and the two singles I’ve released in the past month. I’m so proud of it, particularly excited to share one of the songs which I think is my favourite piece of production/arrangement that Joey Walker and I have done. After that I’ve got what I hope is a bit of a belting single which is a deliberate and violent diversion in style and then another 4 songs to release whilst recording a full album. At some point, I shall get back to gigging with the band and make 2 videos that were in planning before COVID 19.

The Blinders have shared their new track ‘Black Glass’, the latest and final track to be taken from their upcoming album Fantasies...
View Post
Previous articleOxen share creative music video under social distancing
Next article[PREMIERE] Mechner shares the moody, cinematic video for new single ‘Do It Again and Again’

London-based indie-rock quintet Tempesst have announced their debut album Must Be A Dream will be released September 30th, via Pony Recordings. Along with the...
View Post

Please subscribe to our newsletter to get the latest news in your domain of interest. Don't forget to follow us on social networks!

Released on the 14 August via Alan McGee’s Creation 23 label, the Galway four-piece serve up an incisive...
Read more
News

Delta Spirit have announced their first new album in six years, What Is There, out on September 11th via New West Records. Their New West...
Read more
News

London-based indie-rock quintet Tempesst have announced their debut album Must Be A Dream will be released September 30th, via Pony Recordings. Along with the...
Read more
News

The Blinders have shared their new track ‘Black Glass’, the latest and final track to be taken from their upcoming album Fantasies...
Read more
News

The Cat Magic are an alternative band, formed in Bristol around 2018. The impetus behind forming the group comes from two childhood...
Read more
News

[PREMIERE] Mechner shares the moody, cinematic video for new single ‘Do It Again and Again’

June 11th saw Mechner follow up from their exciting first single 'Do you wanna go?', from upcoming mini-LP Club Idem, with 'Do...
Read more
Interviews

We’ve seen a few inventive music videos come our way in the last few months as a result of current circumstances. Some of them...
Read more
News

Spanish-Brit quartet Reme come back with a second single - and a charmingly disturbing video - after its previous release, Royal Cape, was named...
Read more
News

Building off the success of her self-titled debut album, LÉON delivers her second single of the year 'Who You Lovin'- a contemporary track that...
Read more
News

Travel to Switzerland with Saint Mars and their latest music video

Saint Mars have been a band on our radar for some time now, specifically since they released their single, ‘Help’ via Grá Mór Phonic...
Read more